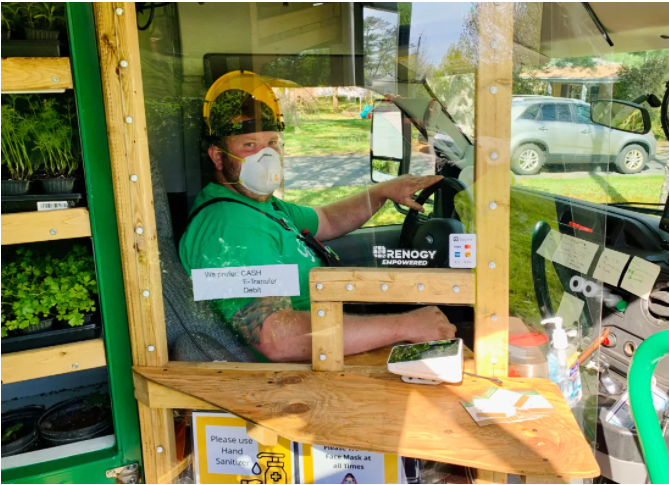 A farmer from Hammonds Plains, N.S., has a unique location for his new plant and produce market — the customer’s driveway.

It’s an accessible way for people to purchase locally grown food and plants during lockdown.

“It’s quite an experience,” said Fogarty, standing next to rows of fruit and vegetable transplants situated where people would normally sit.

“We have been blowing up. Everyone is excited about this.”

As customers step onto the bus, they are often greeted by Fogarty sitting at the steering wheel behind a wood-framed Plexiglas shield, with a small rectangular opening at waist height to process transactions.

There are more than 2,000 plant transplants that line the left and right sides of the bus, everything from tomatoes and cucumber to more exotic varieties such as the chocolate bhut jolokia and the Carolina reaper, known as “the hottest pepper on Earth.”

In a few weeks, Fogarty will pivot away from plants and start filling the shelves with local produce and food, grown on his residential farm in Hammonds Plains and obtained from a dozen other Nova Scotia farmers and producers.

Being “ultra local” is very important to him.

“With us, quality is first and foremost, and price as well,” said Fogarty, who has an infectious larger-than-life personality.

The bus — dubbed “Shirley” after Fogarty’s late grandmother, who died last year — came from Ontario earlier this year, where it was previously owned by Canadian Blood Services.

Fogarty then got to work transforming the vehicle into an energy-efficient mobile market.

He installed 800 watts of solar panels on the roof of the bus, which power its point-of-sale system, cameras, refrigeration, heating and lighting.

“On a sunny day like today … Shirley can produce twice the amount of power that we can actually consume,” said Fogarty, who operates the business with his wife.

“It didn’t make much sense to show up selling plants, being an ultra-local business, and trying to cut down the carbon, and then have a generator blasting in the background.”

Fogarty also removed the vehicle’s commercial compressor and installed an air conditioner, turning it into a refrigerator compressor, making it twice as efficient, he said.

Fogarty’s Market Garden is making house calls in the Hammonds Plains, Upper Tantallon and Glen Haven areas from Monday to Wednesday. Customers simply send him a text message with their address and a timeframe.

From Friday to Sunday, the bus is parked in the parking lot of Cornerstone Wesleyan Church on Hammonds Plains Road.

Although the concept works well during lockdown, the idea wasn’t born out of the COVID-19 pandemic. Fogarty’s residential farm is private and therefore not open to the public, and he wanted an accessible way for the community to purchase his goods.

Fogarty said he believes he is the only solar-powered garden centre on wheels in Canada, and given the positive reaction so far, he’s considering adding to his fleet.

“There’s a reason why the bus is named Shirley. She might have a brother in the future. We’ll see,” he said.