Halifax wants to shut down market garden before it can sprout 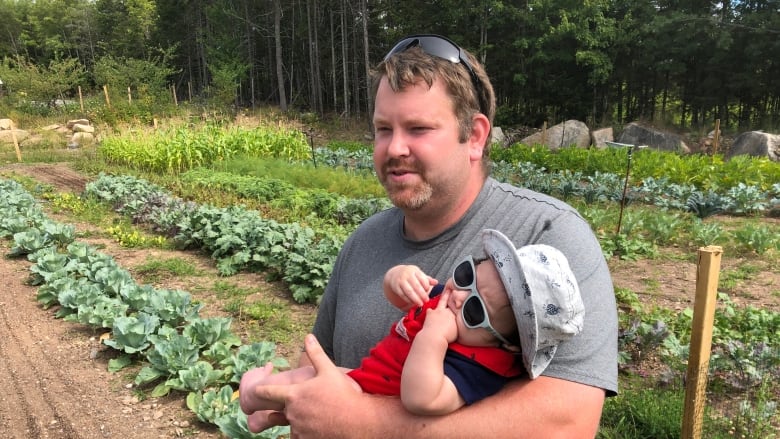 ‘To not allow people to do this is, in my opinion, absurd,’ says property owner

Halifax’s bylaw office wants to shut down a market garden business in Hammonds Plains before it even gets going.

It issued a notice to Pat Fogarty to “cease all agricultural uses” on the property.

“Anyone who has a home garden in some way or another is partaking in agriculture,” said Fogarty. “To not allow people to do this is, in my opinion, absurd.”

Fogarty has a 2.2-hectare property that can’t be seen from the road and is surrounded by woods. He’s built a greenhouse, planted fruit trees and has prepared a large plot to grow vegetables.

He sold transplants grown in his greenhouse this spring at a donated commercial space in the community.

He hasn’t sold any other produce grown on his land. He hoped to do that next year.

“We knew we were not allowed to have an onsite retail component so we were going to be a delivery service, selling to people off-site,” he said.

Fogarty thinks Halifax is behind the times. He points to Vancouver, which allows fruit and vegetables to be grown on properties in residential areas and sold elsewhere.

In fact, according to Coun. Lisa Blackburn, HRM’s new Centre Plan will allow homeowners on peninsula Halifax to do just that. She believes the zoning rules should be changed so market gardens are allowed in all areas of the municipality.

“It’s something that would tackle our food insecurity problem,” said Blackburn. “We know where we want to get to eventually. It’s just a bumpy road to get there.”

Blackburn said the municipality’s Regional Plan is being reviewed, so the issue could be dealt with during that process. But the councillor said she is prepared to make a motion at council to allow Fogarty’s market garden to go ahead if it comes to that.

An official with the Halifax Region told CBC in an email statement on Monday afternoon that the zoning bylaw defines agricultural use as the use of land and buildings for the production of food, fibre or flora.

Maggie-Jane Spray said “the municipality has no regulations in residential zones that limit an owners ability to grow plants, shrubs or flowers on their property” but added “growing such things for sale requires a zone that permits agricultural use.”